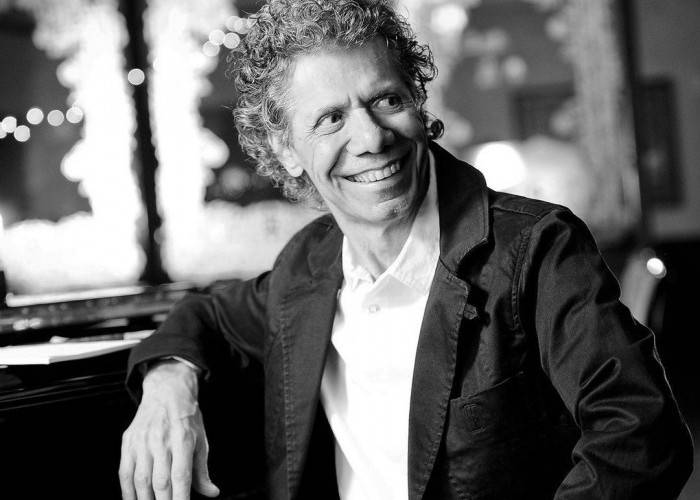 Farewell To My Mentor

Tim Garland writes: For twenty-one years I was lucky enough to call Chick Corea both my mentor and my friend. His insatiable appetite for live music and, crucially, its communication, was infectious, inspiring those around him to produce their very best, most heartfelt music.

His incredibly full schedule was of course a result of his huge popularity. Some of the promoters we shared post-gig meals with would seem like his oldest friends, harking back to concerts from the late sixties on!

As a band leader Chick’s experience seemed unparalleled, and there are precious few who toured to the extent that he did.

In equal measure he was super-disciplined and playfully childlike.

His discipline showed up in his respect for the efficiency of those around him: During those inevitable “rise and shine”, early morning, hotel-lobby-to-airport calls, he would set a great example of good-natured punctuality. His hotel room was always equipped with a full-sized keyboard for regular practice before, and often after, a concert. Leaving a venue we’d sometimes have to wait as Chick would be up on stage again practising Mozart while the cleaners swept their brooms around the stage!

Early on, Chick was patient when there were things us newbies needed to learn and quickly forgiving of errors of judgement. He taught us how to communicate on larger stages and how to minimise barriers between yourself and the music, as well as the music and the audience.

On one of my first performances with him he beamed at me as I walked past the piano after taking a solo, and shouted over “That’s the shit Tim!” I was so pleased to have heard the word “the” in there!

As if a foil to Chick’s sense of discipline was his sense of playfulness. He was playful in his sense of mischief and endless inventiveness on stage. I can’t think of one concert when he wouldn’t have played some phrase that would produce a kind of joyful laughter from his sidemen, something so hip and fresh, so individual and so locked-in with the groove. I remember after my first gig with him at The Stables, Wavendon (when it WAS still actually a converted stable!), we were discussing how it felt to be “locked-in” rhythmically, his groove was so visceral, crisp and decisive that it pulled you into its orbit. In his company, one was made aware of how to place notes and phrases, how to be truly playing as part of the band and never simply over it.

On our many long bus rides he’d be talking to one or other of the band. The subject matter was always fascinating, Chick’s attitude and ear always open and questioning. He was eager to share his experience and to learn new things. He was still stretching his wings and growing along with the rest of us.

Chick had a passion for the drums being a drummer himself, his talks with Marcus [Gilmore] would bear the impression of two music students sharing experiences and digging what they love. Forget the 45 years that lay between them, it certainly had no place in that conversation! He gave exceptional regard to his drummers, they were “the High Priests” of the music, and he sometimes referred to the piano keyboard, for obvious reasons, as an extended drum kit.

With me Chick might talk about orchestration, composition, and approaches to getting the very best out of everyone on stage. He also gave exceptional respect to composers, and my great buddy, the composer Billy Childs who first introduced me to Chick was quick to remind me of how he often spoke of us in the same sentence. What a blessing.

In these personal moments with Chick I was deeply honoured to hear so many stories of musical heroes first hand, like when Miles’ band members all swapped instruments on stage before he came out. “You guys are crazy” was the raspy reaction he gave when they played him on! Chick’s playfulness was there back then and it stayed. He got fed up at one point during a tour of Europe; playing in these lavish halls threatened to make the listening experience stuffy and over-polite, so he tried to break out by having us all actually set up our gear at the beginning of the gig in front of the audience, cases everywhere, whilst he sat at the piano improvising his way into the first piece of the set!

Sometimes he’d surprise an unsuspecting band member, suddenly inviting them to introduce the next song, or he might just leave the piano, pick up a percussion instrument and start an impromptu rhythmic party. He got the audience involved too, inviting them to sing, to come up on stage, to call out suggestions…… no wonder thousands of music-lovers felt they knew him beyond just his music.

His five decades of musical creation and risk-taking that did not diminish with age, has led to fans from 75 to 25 united in grief at his parting. I remember occasions at Vigil band rehearsals when Chick would walk in clutching sheet music for brand new compositions, throwing it up on our stands with such maverick enthusiasm.

To think of the scope of the music that came from him, could there be any jazz composer that hasn’t assimilated a part of Chick into the very marrow of their bones? And such diversity! Think of well-known pieces like Litha, La Fiesta or Humpty Dumpty, the knotty mischief of his orchestral pieces such as The Continents or the episodic romping fusion themes of the Return To Forever band!

Chick’s eclecticism was truly unparalleled and in this I am reminded by my buddy Kris Campbell, our road warrior tour manager and unsung backstage hero, that “Everyone has their own book they can write about Chick”.

As often the only one travelling in from Europe on a tour or project, my jet lag was the reverse of the others’. One time I was nodding off in the hotel after a long-haul flight and at about 2am local time Chick calls up and says “I’m having a steak downstairs, they kept the kitchen open, see you in 5?!” – and one had to weigh up issues of personal health regarding sleep, against hanging out in deep conversation with the Chickster, talking about Henri Dutilleux or Art Tatum or how there was not enough good humour in contemporary music!

Humour was central, he’d often quote the comedians he’d grown up watching, as well as Monty Python, and old jokes of Ronnie Scott’s. But I remember a time when I tried to get him into Alan Partridge (a blast of self-deprecating Brit humour!) – THAT went down like a lead balloon!! Why so? Chick had limited time to identify with the humour of self-pity or self-destructive behaviour. His central modus operandi was appreciation. He was totally attuned to lifting everyone’s feeling of self-worth through his attentive appreciation. Just look at the amount of people sharing their selfies with him, and at how often he’s pointing at THEM, the fans, acknowledging THEIR importance, encouraging us all to feel inspired in our own endeavours.

Chick not only believed in us as his fellow artists, but genuinely relished the input we could offer and with that came the possibility that we might take a risk of our own that he didn’t actually dig, and you’d realise later that his interest was centred chiefly around the band, and that within risk-taking there had to be dialogue. Music for him was Communication.

His investment in the talents of others meant he never ran out of things to say as a musician with such a long career. I remember sitting next to him on a flight to Tokyo and mentioning, “this is my fourth time now”, his reply being that he’d been at least twice a year since 1966 (the year I was born)!

In Chick’s later years he was still incredibly resilient. During a potentially violent uprising in Argentina, we were forced to leave our hotel in the dead of night driving off in a rickety bus headed for our next venue fourteen hours away. There were rumours of buses being forcibly boarded by strikers in Buenos Aires. We took a heavily bumpy ride through the outbacks of the country. Chick bore the lack of comfort with such resilience that I didn’t dare make any complaint myself.

He always asked after Amanda, my wife, and my kids Rosa and Joe and we, of course, got to know Gayle. The last time I played at the Blue Note, Gayle took Mandy for a surreal 1am Chinese foot-massage just over the road “while the boys did their thing” sort of thing!

How very New York and how very Gayle!

Chick, you have left a gaping hole that we are all left staring into. We never imagined a world without Chick Corea in it, without him sending songs with Gayle singing as Christmas gifts, or releasing project after project (I was merely in about four but that was life-changing enough) or sharing his life’s wisdom. Thank you for lifting the spirits of millions of us and reminding us of what is possible. Thank you for showing such fearlessness in a world so wracked with fear, and my humble thanks for believing in me, a lad from Kent who was as hooked on music as you and who was privileged to share just a fraction of your experience. You have been the most inspirational man I am ever likely to meet and our global musical family both within and beyond the world of jazz has been stunned into silence. Yet I can hear your voice saying that you have merely Returned to Forever, and there you are just pointing at our instruments saying, “C’mon man! let’s hear what you’re working on NOW!”

Sending much much love to Gayle and the family